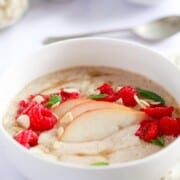 This creamy raw buckwheat porridge recipe makes a beautiful and wholesome raw vegan breakfast. Make it with non-dairy milk sweetened with banana and cinnamon and top with raspberries, pear slices and flaked almonds.

Serve this dish at room temperature, so it's not fridge cold. It has the consistency of cream but, if you prefer to give it a thicker feel then use less plant milk.

I know this may seem like a bit of a wild take on traditional oat-based porridge, as there's no cooking involved. Nevertheless, this overnight buckwheat porridge is so smooth, creamy and totally satisfying!

Not only that but it's gluten-free and has almost twice the amount of protein than oats as well as a host of nutritional goodness from vitamins and minerals.

If you're a friend of this blog, you'll know that I love raw buckwheat groats.

Honestly, I feel like this is such an underrated food. Not only is it tasty, but it's versatile, and you can use it in so many recipes.

I mostly use buckwheat soaked or sprouted and add it to salads, smoothies and breakfast recipes. Imagine my excitement when I saw that you could blend it into a deliciously creamy breakfast porridge!

While it does sound weird at first, the whole idea of an unheated porridge, the reality is it's divine and totally worth trying.

Other ingredients used here are:

See the recipe card for quantities.

You may like to check out my other raw buckwheat recipes, such as this raw vegan buckwheat parfait or perhaps a cereal instead?

When preparing buckwheat groats, you'll need to add them to a bowl with double the amount of water as they soak up quite a lot. I use a fine mesh sieve for rinsing.

Once the buckwheat is soaked, this recipe is quick and easy to make. Just blend it up with plant milk, banana and cinnamon. Divide it evenly into bowls and top with fruit and nuts.

Be sure to buy raw buckwheat rather than roasted, which is sometimes called buckwheat kasha.

Top the porridge with sliced pear, raspberries and almond flakes. Add fresh mint as a garnish.

If you don't like bananas or the other fruits in this recipe, easily replace them with alternatives. Here are some suggestions:

Store the buckwheat porridge in the fridge separately from the fresh fruit and add the fruit just before serving. Good for 2-3 days.

Not suitable for freezing. 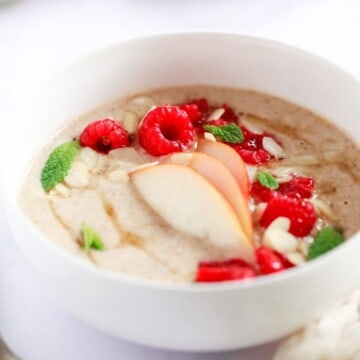 Soaked buckwheat will appear slimy until rinsed well.
Keyword Autumn, Porridge, Raw buckwheat breakfast
Tried this recipe?Let us know how it was!

The UK Food Standards Agency recommends people in vulnerable groups always cook any sprouts until steaming hot all the way through before eating them.

This is because sprouts sometimes contain bacteria, which some people may be susceptible to. Vulnerable groups include the elderly, young children, those with a weakened immune system, and pregnant women.

Never eat sprouts or microgreens that look or smell bad or weird. If you're unsure, then throw them out and start again.

This site uses Akismet to reduce spam. Learn how your comment data is processed.

I’m Juliette, welcome to my blog where I share my love for plant based whole foods & raw vegan recipes.

Get my recipe ebook

We use cookies on our website to give you the most relevant experience by remembering your preferences and repeat visits. By clicking “Accept All”, you consent to the use of ALL the cookies. However, you may visit "Cookie Settings" to provide a controlled consent.
Cookie SettingsAccept All Reject All
Manage consent

This website uses cookies to improve your experience while you navigate through the website. Out of these, the cookies that are categorized as necessary are stored on your browser as they are essential for the working of basic functionalities of the website. We also use third-party cookies that help us analyze and understand how you use this website. These cookies will be stored in your browser only with your consent. You also have the option to opt-out of these cookies. But opting out of some of these cookies may affect your browsing experience.
Necessary Always Enabled
Necessary cookies are absolutely essential for the website to function properly. These cookies ensure basic functionalities and security features of the website, anonymously.
Functional
Functional cookies help to perform certain functionalities like sharing the content of the website on social media platforms, collect feedbacks, and other third-party features.
Performance
Performance cookies are used to understand and analyze the key performance indexes of the website which helps in delivering a better user experience for the visitors.
Analytics
Analytical cookies are used to understand how visitors interact with the website. These cookies help provide information on metrics the number of visitors, bounce rate, traffic source, etc.
Advertisement
Advertisement cookies are used to provide visitors with relevant ads and marketing campaigns. These cookies track visitors across websites and collect information to provide customized ads.
Others
Other uncategorized cookies are those that are being analyzed and have not been classified into a category as yet.
SAVE & ACCEPT
Powered by