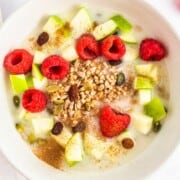 A healthy raw buckwheat breakfast made with wholefoods, topped with crisp and juicy diced apple and gorgeous raspberries. Serve with your favourite plant milk.

This raw buckwheat breakfast muesli is high in fibre, satiating and absolutely delicious!

Raw, vegan, gluten-free and dairy-free. It’s also naturally sweet from the fruit so there's no real need for any added sugar.

It is really simple to create your own vegan muesli with your favourite breakfast ingredients. I love to use raw buckwheat groats instead of oats. They’re rich in nutrients and make a great alternative to many grains if you’re into raw foods.

Make this raw buckwheat breakfast recipe your own by creating your own blend of delectable nuts, fruits and seeds.

Nuts like pecans, hazelnuts, cashews or almonds. Or you could change the sultanas for another dried fruit like chopped dates, dried apricots or goji berries maybe. There are so many juicy, crispy, crunchy combinations you can create.

Try to avoid the pre-milled varieties of seeds if you want to use the freshest ingredients. It’s easy to grind them yourself (just before serving) either using your blender or a coffee grinder.

When you’re out shopping for raw ingredients be sure to check the packaging. Buckwheat groats, for example come in two varieties, toasted and raw.

Toasted buckwheat is called Kasha and is a darker brown in colour than the raw version.

Can you eat raw buckwheat groats?

Yes, soaking the raw buckwheat groats overnight will soften them and make them much easier for our bodies to digest. Buckwheat groats can also be eaten sprouted. I prefer not to wait that long and use them soaked instead. They do make the water a gluey texture after soaking so be sure to rinse and drain them thoroughly before using.

Yes! If you like to meal prep then it’s really easy to store your preferred breakfast seed and dried fruit mix in a mason jar, for use during the week.

By building up a small pantry of raw ingredients makes it so easy to create your own vegan muesli mix made with your favourite nuts, seeds and dried fruits.

When you're using pre-soaked buckwheat in recipes remember to store the buckwheat groats separately from your seed mix. You'll need to soak the the groats in a bowl of water overnight then rinse and drain them thoroughly before using.

The smaller seeds like flax seeds, poppy, sesame and chia seeds do like to fall to the bottom of jars, so remember to give them a little shake or stir before using.

Top your morning cereal with whatever plant milk you have, like my almond or hazelnut milk and then throw on whatever fresh seasonal fruit you like.

I find it simple to use measuring cups instead of scales to weigh everything.

If you love this recipe you may also love my Raw Buckwheat Porridge, or this easy blackberry parfait. 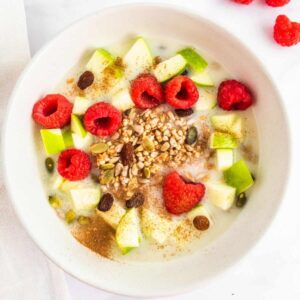 Keyword muesli recipes, raw vegan breakfast, recipes with buckwheat
Tried this recipe?Let us know how it was!

Hey, did you like this recipe? If so it would mean the world to me if you would please Pin this to your Pinterest boards or even share it on social media so others can find it too.

I’m off for some tea.

This site uses Akismet to reduce spam. Learn how your comment data is processed.

I’m Juliette, welcome to my blog where I share my love for plant based whole foods & raw vegan recipes.

Get my recipe ebook

We use cookies on our website to give you the most relevant experience by remembering your preferences and repeat visits. By clicking “Accept All”, you consent to the use of ALL the cookies. However, you may visit "Cookie Settings" to provide a controlled consent.
Cookie SettingsAccept All Reject All
Manage consent

This website uses cookies to improve your experience while you navigate through the website. Out of these, the cookies that are categorized as necessary are stored on your browser as they are essential for the working of basic functionalities of the website. We also use third-party cookies that help us analyze and understand how you use this website. These cookies will be stored in your browser only with your consent. You also have the option to opt-out of these cookies. But opting out of some of these cookies may affect your browsing experience.
Necessary Always Enabled
Necessary cookies are absolutely essential for the website to function properly. These cookies ensure basic functionalities and security features of the website, anonymously.
Functional
Functional cookies help to perform certain functionalities like sharing the content of the website on social media platforms, collect feedbacks, and other third-party features.
Performance
Performance cookies are used to understand and analyze the key performance indexes of the website which helps in delivering a better user experience for the visitors.
Analytics
Analytical cookies are used to understand how visitors interact with the website. These cookies help provide information on metrics the number of visitors, bounce rate, traffic source, etc.
Advertisement
Advertisement cookies are used to provide visitors with relevant ads and marketing campaigns. These cookies track visitors across websites and collect information to provide customized ads.
Others
Other uncategorized cookies are those that are being analyzed and have not been classified into a category as yet.
SAVE & ACCEPT
Powered by